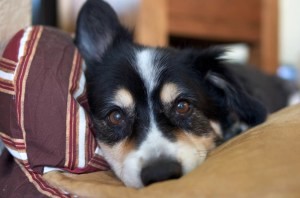 Nigel’s passing was difficult. You introduced the two of us at a time when I needed a companion and so did he. In a way no one will ever understand, he saved my life. We walked every square inch of Pasadena together. There was a time when Nigel and I routinely walked along a nearly 5 mile course around a rather nice portion of Pasadena. If I tried to take a short-cut, he would point in the direction he wanted to go and pull HARD. I couldn’t move him. I went where he wanted. Gladly.

I miss Nigel. I think of him everyday. I always will. 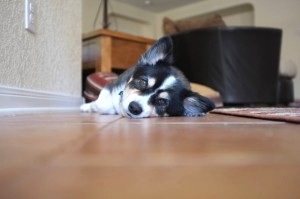 Our family had an Alaskan Malamute when I was a child who lived to be twelve. We had to put him down due to a nervous system dysfunction. When we did, I made him a promise: I’d get another Alaskan Malamute and do better by him than I had by Orca (our family Malamute). Well, I lived in an apartment from 1988-2008, so that was not permissible (Orca passed in 1992). After graduate school I desperately wanted to adopt another dog. I was told by EVERY adoption agency, regardless of breed, that I wasn’t eligible because I lived in an apartment. I couldn’t even adopt a Chihuahua. Then, you arrived on the scene.

You decided that if I was active enough, I could own a Corgi. God bless you for thinking out of the narrow, constrictive box that affects every other adoption agency. One has to think beyond convention and get to know the person who is doing the adopting. A mere online form tells you nothing. That’s how it works in the human world and that’s how it should work in the canine world too. You are the ONLY adoption agent that I contacted who recognized this truth. In fact, I was turned down by the PWCCSC on my first two attempts. Try number three landed me with you. You and you alone, Miss Jane, decided that I was worth Nigel and that Nigel was worth me. It worked. Nothing in my life (except my recent marriage) has worked better. You had, and have, tremendous insight. 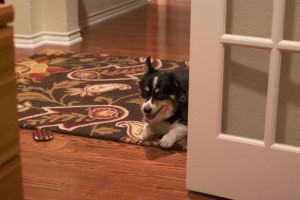 I adopted Nigel when he was almost four. If you recall, he was approximately 54 pounds when I adopted him. At one point, the heyday of his desire to walk, he was 31 pounds and could leap tall buildings in a single bound. More typically, he weighed around 37-38 pounds. The target weight you passed along to me from your vet on the day of his adoption was “under 40 pounds.” We succeeded. It took about three months for me to get him from 54 to 40 pounds, and from there, it was easy. He loved to walk. He loved to do everything with me. He loved to live.

Mr. Nigel Darby lived to be 13 years and seven months. He and I had an exquisite life together. I would venture to guess that he was among the happiest Corgis on the planet. Happier than the dogs owned by all the adoption agents who turned me down, that’s for sure!

Unfortunately, Nigel had cancer. He had had three tumor removal surgeries and one joint replacement (his knee). He eventually died of cutaneous vasculitis. On his deathbed, our veterinarian took some last minute radiographs and found two more undiscovered tumors pressing up against his intestines. At least one of them had initiated severe internal bleeding on the morning of his death. My wife, a veterinary technician, caught the change in his behavior immediately. Within hours, he was without hope. He was put down that day. Our veterinarian, who lives several miles away (this is Texas, miles are longer here), came to our house that night to attend a wake. She was in tears most of the night. This is a woman who was a particle physicist with a Ph.D. from M.I.T. who decided, in her late 40’s, to become a veterinarian. She then went to the University of Illinois (she had been working at Argonne National Laboratory) and got her DVM. Now she practices outside of San Antonio and we are very fortunate to know her. Her name is Dr. Theresa Fuess. Nigel made such an impact on Dr. Fuess’s life, that she felt that she had to mourn his passing with us. Dr. Fuess is an amazing woman, but more to the point, Nigel was a profoundly great dog. 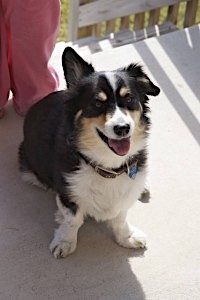 I’ve attached some photos of Nigel. I hope that you can publish them in your newsletter. He was and is the most amazing dog I’ve ever known – although I have another Corgi named Tyler (that’s how my wife and I met, but that’s another story) staring at me as I type this who disagrees. I would GLADLY accept another PWCCSC adoptee, although I live in San Antonio, TX now. If there was a convenient way to get a PWCCSC pup here, though, I’d take gladly take one. After my experience with darling, wonderful Nigel, I can’t think of a better thing to do.

Recall that you were told by his original parents that he didn’t like toys. Well, he learned from his Corgi brother Tyler, and his German Shepherd friend Sophie that toys were a lot of fun. After a few years with me, Nigel came to truly enjoy toys. He didn’t quite know what to do with them, but he recognized from the other dogs that he was supposed to like them and he felt my pleasure when he played with them, so he did what he could. I will include at least one picture of him with a toy (although it’s outside during a hot San Antonio summer, so he’s not doing anything with it).